Jacob Chase came Center Stage with Mark Gordon to talk about his latest film COME PLAY, a new film about a boy and his scary friend Larry.

COME PLAY follows Oliver, a lonely young boy who feels different from everyone else. Desperate for a friend, he seeks solace and refuge in his ever-present cell phone and tablet. When a mysterious creature uses Oliver’s devices against him to break into our world, Oliver’s parents must fight to save their son from the monster beyond the screen. 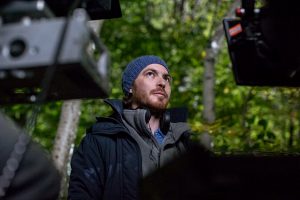 Chase is an alum of the 2017 Sundance Episodic Lab and was listed as one of Hollywood’s Top 100 New Writers on the 2017 Young & Hungry List. Additionally, he has written screenplays for Amazon, The Jim Henson Company, Cirque du Soleil and Bazelevs, among others. He won the 2016 Crash the Super Bowl contest with his commercial “Doritos Dogs,” which aired during the Super Bowl and earned him an exclusive directing mentorship under Zack Snyder on the set of Justice League.

Chase directed the feature film The Four-Faced Liar, which premiered at Slamdance and won the HBO Audience Award for Best First Feature at Outfest. He directed staged readings of Martin McDonagh’s A Behanding in Spokane and Terri Minsky’s Amazing Frogs and Toads. Chase has directed commercials and branded content for Sony, Pandora, and Beats by Dre.