By now, you have probably binge-watched all the good films on Netflix and Amazon Prime, and you think there’s nothing left on TV. Well, I’ve got great news for you, Dance Camera West presents the 2020 Virtual Film Festival, streaming until June 1, on OVID.TV It’s a festival of short dance films from all over the world. We are going to talk about one of the films from the creative team of Matilda Sakamoto, and Derrick Belcham called If I Sound Happy, That’s Your Mistake.

Matilda and Derrick both lived in New York City and knew each other’s work, but they had never worked together. One night, Derrick was at the Ace Hotel and saw Matilda performing the staged version of If I Sound Happy, That’s Your Mistake. He loved the piece and approached her about making it into a short film. 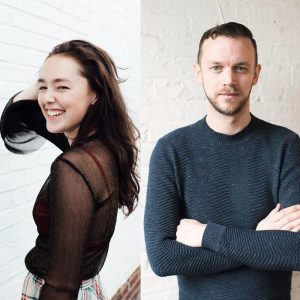 Derrick Belcham: I loved it. She was incredible. They cycled it twice, so I saw Matilda do it two times, and I thought it was really beautiful. We all stuck around and had drinks afterward. We were both pretty serious about it at the moment, and we just decided to pick a date to start filming, and we just stuck to the date.

Matilda Sakamoto: He was a great initiator on making it happen, very active, it was perfect.

Mark Gordon: What impressed you most about Matilda’s work?

Derrick Belcham: Matilda has all kinds of natural charm. That is for sure, and she’s an incredible dancer, but beyond that, she has so much self-awareness, and she’s such a natural clown. I’ve respected her pieces in film before this, and Matilda is totally charming.

Mark Gordon: Who are some of the choreographers who have inspired you?

Matilda Sakamoto: There are a lot of Israeli choreographers right now that I think are amazing, classic Ohad [Naharin]. There are the European choreographers like Marina Mascarell and Pina Bauch. There’s a ton. I try not to actively think about them while I am choreographing because I don’t want to accidentally take something, move for move from a choreographer, from something that I have seen because I watch them, and I admire so much. There are influences in my work all the time from different people that I love. I try not to be like this is this move, and that is from them so that I am hopefully not inadvertently copying them directly. Because then what’s the point of me making stuff?

Mark Gordon: Matilda has a chameleon-like quality; she changes with each project. Whether it’s playing a nun in a pop star’s music video or rocking out in an Apple AirPods commercial, she brings a freshness and energy to the screen that makes you want to dance.

Matilda Sakamoto: I’m not the most physically gifted person in the world. I can barely do a cartwheel, and I am not turning a million times or anything like that, but the part I’ve always really connected to with dance, and that people connect with me on, is the emotional side of it or the performance side of it. I don’t ever try to think that I am putting something on, but I feel it from the inside and hope that it shows on the outside.

When I asked Matilda about her creative process, she told me that she doesn’t overthink it. The creativity comes in the form of a feeling, a sensation emanating from her chest.

Matilda Sakamoto: I feel like I second guess myself a lot in life, and I overthink a lot of things. I said earlier that dance, physically, is not always [easy for me]. I’ve had to work really hard at it. But creating is one of the things where it’s definitely a process, and it’s hard. The thing that I think I question myself the least on, in a very liberating way, which makes it very hard to write grants and applications, but it’s kind of just like the moment where when is right, it feels right, and there’s no questioning it. It feels like a very specific feeling in my chest when I know that something is right. It will be even just tiny tweaks until it’s there. Even with Derrick, he made the first edit, and then I came over, and we tweaked it. And a lot of the edits were tiny tweaks, but then there was that moment when I went, oh yeah, this is it. It’s like a very specific feeling that’s very hard to say in words, and it’s not coming from a brain place. I feel like it’s coming from a chest place. And that’s how kind of approach my work because it’s the only time I allow myself not to overthink, second guess, and feel bad about something.

If I Sound Happy, That’s Your Mistake follows a young woman who feels disconnected from the world around her. She puts vulnerability aside in an attempt to connect with others but rejected she experiences a more profound sense of loneliness

In a telling scene from the film, she stands awkwardly in front of several tv monitors displaying her image. She looks nervous, uncomfortable. She fidgets as she tries to fit in. Someone is watching, a man, but he is unresponsive, he walks aways. She grabs her headshots and desperately offers them to him. But He leaves, and she is left alone

Matilda Sakamoto: This whole piece to me has a feeling of like I’m trying to be what I think you want me to be, but it doesn’t work and then in general, that person to me, I have a character where I am someone who is trying so hard to be cool but they can’t so that’s why they can’t sit still. They’re constantly shifting [their body] to be comfortable with themselves, but it’s just not possible. It’s kind of like, [you want to be accepted] by whoever is viewing you.

For years Derrick Belcham shot music documentaries and videos, but when he started working dancers, his perspective of the craft of filmmaking changed, and the experience opened him up artistically.

Derrick Belcham: I filmed in music. I filmed live performances in music, traveled around the world, and worked with a film collective is the side of it that most resonates, but it’s a business called La Blogothèque. They started a music documentation style called The Take Away Show. The Take Away Shows started at a time where it was very important to have a lot of artifice in your music videos. The sort of shine of things was very important. And so they took bands out into the street and made impromptu, improvisational music films, and that informs the way that I made pictures, and so I made a one-shot, one-take documentary, sort of living film, with musicians. The first time that I filmed with a dancer, it added this brand new, sort of this point of interest and collaboration.

The first film that I made was with a New York dancer named Melanie Maar. We went to Central Park and the Gazebo. A man named Kenta Nagai played a Japanese guitar, and Melanie danced, and they had a set-piece. But I never filmed a dancer before and so the gravity of her moving her body and me positioning myself so that the dancer and musician could be in the frame in interesting ways, that completely changed the way I felt about this kind of, as it occurs, improvisational filmmaking.

Derrick would go on to collaborate with several dancers. One, in particular, was Emily Turndrip. They worked on a film called Otis Walks Into The Woods. It was a process he would later describe as improvizing towards connection.

Derrick Belcham: Part of our process was to talk about theme and do some role building or find a location, something like the Philip Johnson glass house where [Otis Walks Into The Woods] is set. Then go and work with improv, improvisational filmmaking, improvisational dancing, the choreography kind of playing with the innate properties, like props at the location. And then basically editing as you go. Seeing what’s working and then trying to move towards a greater whole in the moment. Then you know how to get your coverage, and then, by the end of the day, you have something in the can, and then we would sit and basically figure it out in the edit. For something like that because it was purely an improvisational film.

With Matilda, it was a very, very refreshing change for me in that it satisfied something that had been lacking in a lot of the films I’d made over the years because they were, in some ways, strictly esthetic pieces. But with Matilda, I saw something, like an opportunity to actually engage narrative, which is something that can be rare in dance film. I can have the appearance of narrative and have no narrative.

Eventually, this idea of narrative film, dance, and music would come together, in Leonard Cohen, the story of Thanks for the Dance.

Derrick Belcham: That was a production spearheaded by Christoph Adbrick, who’s the CEO of La Blogothèque. That was his passion project. He put together everybody involved in that from Leslie Feist to Richard Reed Parry, so many amazing people were involved in that. I had the opportunity to bring Bobby Gene Smith and Marta Miller on to do what amounted to this artistic bookend to this production because the Cohen record in question was, his son and he had been working together in the last years of [Cohen’s life]. And they did all of these studio sessions together. This record, which came out last year, [had] all of these beautiful [vocals], takes. His son [collaborated] with all these artists to create what became Lenore Cohen’s [final] record. We interviewed everyone involved, and then the dance segment [was a] visual representation of Lenord through time. Bobby and Marta [were] playing lovers of Lenord at different stages of life—remembering him. And so we put his fedora in the room and rented out this space. And [the dancers] just sort of riffed on the song. And that became the beginning and the end of this documentary.

Mark Gordon: What would you like an audience to go away with after they see If I Sound Happy, That’s Your Mistake?

Derrick Belcham: I want them to fall in love with Matilda

Just a reminder you can catch If I Sound Happy, That’s Your Mistake streaming until June 1 on OVID.TV.