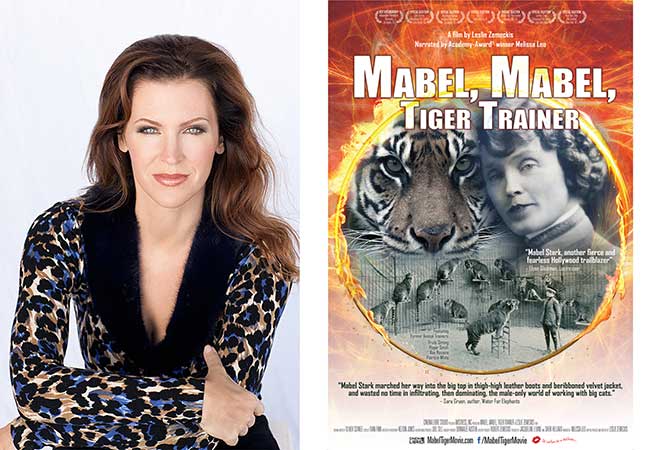 Stark, who escaped poverty to join the circus and became the first female tiger trainer during an era when women were told they couldn’t train the big cats (and when this kind of thing was okay). After the circuses disbanded the wild animal acts in the 40s, Mabel continued her show at the Thousand Oaks wild animal park, Jungleland, for three decades working well into her 70s when she died an unfortunate death. APRIL 20, 2018 would mark 50 years since Mabel’s death.

ABOUT LESLIE ZEMECKIS
Leslie Zemeckis is an actress, author and award-winning documentarian. She has acted opposite Tom Hanks, Michael Madsen, Anthony Hopkins, Steve Carell and Colin Firth. Zemeckis wrote, produced and directed the critically acclaimed documentary BEHIND THE BURLY Q the true story of old-time burlesque, which aired on Showtime and BskyB in the UK, was featured in The New Yorker and USA Today, and heralded as the definitive history of burlesque. Her second book GODDESS OF LOVE INCARNATE, the story of iconic burlesque stripper Lili St. Cyr, has garnered interest in film and Broadway for adaption. Published in the Fall of 2015, it was a Vanity Fair Hot Reads pick as well as the Los Angeles Times Top Christmas Reads. Her second film is the award-winning BOUND BY FLESH, about vaudeville superstars Daisy and Violet Hilton and debuted at #5 on Netflix. MABEL, MABEL, TIGER TRAINER is Zemeckis’ third documentary, and debuted at the Santa Barbara International Film Festival in February 2017.

For more interesting interviews with filmmakers, tune into Center Stage with Mark Gordon