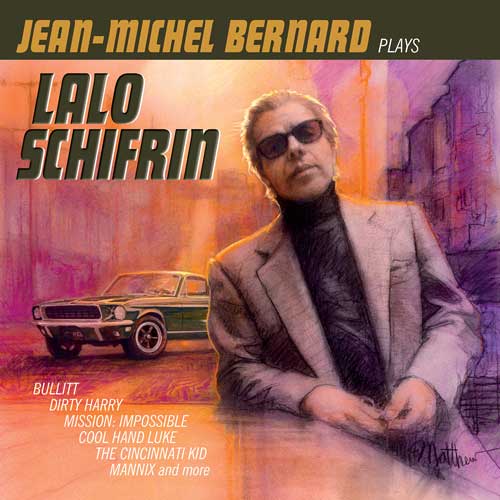 Tonight on Center Stage, I will be playing tracks from a fantastic new CD JEAN-MICHEL BERNARD PLAYS LALO SCHIFRIN.

I play the first track from the CD, the theme from the hit television show Mannix, and I’m hooked. My ears fill with music that transports me back to the days of smoke-filled nightclubs, martinis, and Jazz.

The inspiration for JEAN-MICHEL BERNARD PLAYS LALO SCHIFRIN comes from the 2016 La Baule Film Music Festival where SCHIFRIN was the guest of honor. JEAN-MICHEL BERNARD gave a tribute concert to celebrate Schifrin’s work. During the performance, Bernard invited Schifrin on stage. Together, the men played 35 minutes culminating in Schifrin’s beloved “Mission: Impossible.”

JEAN-MICHEL BERNARD PLAYS LALO SCHIFRIN is a tribute to the mastery of Schifrin and a way to recreate that historic moment.

Coming up October 7th, Varèse Sarabande, together with Musicians at Play and Music Fund Los Angeles, will celebrate the 85th birthday of Schifrin with a special concert at the Alex Theatre in Glendale. Click here for more detail about the event.