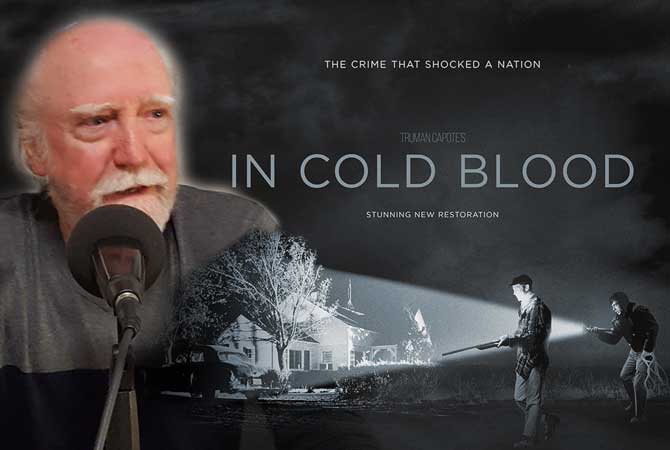 Scott Wilson came Center Stage with Mark Gordon to talk about his work on the film IN COLD BLOOD as well as his career working as an actor for some of Hollywood’s most distinguished filmmaker including, Norman Jewison, John Frankenheimer, Philip Kaufman, Richard Brooks and William Peter Blatty.
The interview originally aired Tuesday, March 21, 2017 on KXLU Los Angeles, 88.9 FM

In Cold Blood, the film version of Truman Capote’s immensely popular true crime novel, was nominated for four top Oscars in 1967. Richard Brooks received two nominations, for Best Director and Best Adapted Screenplay, and the film was also nominated for Conrad Hall’s striking cinematography and Quincy Jones’ memorable score.
In his best-selling book, Capote chronicled the events leading up to and following the senseless murders of a family of four in Holcomb, Kansas in 1959. He drew a pointed contrast between the prosperous, all-American Clutter family and the two social outsiders, Perry Smith and Richard Hickok, who committed the murders.
In adapting the book, Brooks (the Oscar-winning writer-director of such films as The Blackboard Jungle, Cat on a Hot Tin Roof, Elmer Gantry, and Sweet Bird of Youth) resolved to be as faithful as possible to Capote’s chronicle, even filming in many of the actual locations where the events took place. With Capote’s encouragement, Brooks cast unknown actors as the two killers, and the performances of Robert Blake as Smith and Scott Wilson as Hickok earned critical raves. More established actors John Forsythe, Paul Stewart, and Will Geer filled out the supporting cast. Brooks also bucked the industry practice and decided to shoot the film in black-and-white at a time when color cinematography had become virtually mandatory for big-studio films.
Reviews at the time were largely positive. The Saturday Review’s Arthur Knight declared the film to be “one of the finest pictures of the year, and possibly of the decade.” Its reputation has not diminished. In an article in The Wall Street Journal in January of 2017, critic Peter Cowie called the film “a classic of American cinema” and added, “In Cold Blood retains its relevance today, even as random shootings continue to appall.”
About Scott Wilson
Scott Wilson made his film debut earlier in 1967, in the Oscar-winning In the Heat of the Night. In Cold Blood was only his second movie. He went on to co-star in John Frankenheimer’s The Gypsy Moths, the Robert Redford version of The Great Gatsby, Philip Kaufman’s The Right Stuff, Richard Fleischer’s The New Centurions, William Peter Blatty’s The Ninth Configuration, and more recent appearances in Dead Man Walking, The Last Samurai, Monster, and Junebug. He also is known for his roles in the popular TV series CSI and The Walking Dead.

2017 will mark the 50th anniversary of the release of Scott Wilson’s first two films “In the Heat of the Night” and “In Cold Blood”. Both films are listed on the National Film Registry of culturally, historically or aesthetically significant films worthy of preservation in the Library of Congress.

In a highly diversified motion picture career Scott Wilson has emerged as the choice of an impressive list of the film industry’s most admired directors, who have called on the accomplished actor to fill leading and pivotal roles that often are lauded by film critics as the highlights of a film. The heralded actor has scored memorable film characterizations for a long list of directors who have gained from the profound characterizations that have placed Wilson at the top of his profession. It was Norman Jewison who first spotted Wilson’s potential when he cast him as a murder suspect proven innocent in the classic “In the Heat of the Night”, opening the door for Richard Brooks to star him as Richard Hickock in one of the screen’s most insightful portrayals of a complex killer, in the Truman Capote classic “In Cold Blood”.

A native of Atlanta, Georgia, Wilson found his professional destiny when he hitchhiked to Los Angeles, California and landed in an acting class where he was given a scene to read from the Eugene O’Neill play “A Long Voyage Home”. It was a moment that catalyzed his dedication over the next five years to learning all aspects of the craft of acting even as he struggled through a variety of menial jobs to continue his studies.

International critics hailed Wilson’s performance in Krzysztof Zanussi’s “A Year of the Quiet Sun”, winner of the Venice Film Festival’s Golden Lion and the great Polish director sought him out again to play the Polish Saint Brother Albert in “Our God’s Brother”, based on a play written by Karol Wojtyla, who later became Pope John Paul II. The Pope himself invited Wilson to screen the picture at Castel Gandolfo, complimenting the actor as reaching deeply into his own thoughts about the character. The Catholic Church has embraced the film internationally.

On television Scott Wilson was seen in a recurring role as Sam Braun, on the top-rated CBS series “CSI: Crime Scene Investigation” and as the universally beloved character, Hershel Greene, on the wildly successful AMC series “The Walking Dead”. He will shortly be appearing as a regular in the role of Abel Johnson in the Netflix original series “The OA” with Brit Marling, directed by Zal Batmanglij.