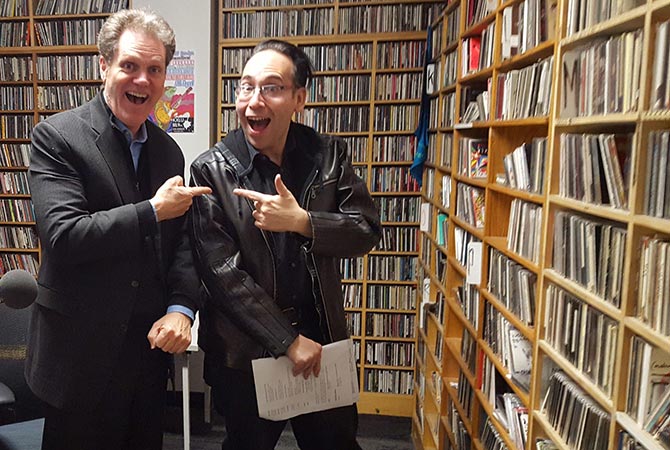 Mike Mendez veteran horror filmmaker, came Center Stage with Mark Gordon to talk about his latest horror film DON’T KILL IT. It tells the story of an ancient evil that is unleashed in a small Mississippi town leaving a trail of death and destruction as it passes from host to host. The only hope of survival lies with a grizzled demon hunter (Dolph Lundgren) who has faced this terror before. Together with a reluctant FBI agent (Kristina Klebe) he has to figure out how to destroy a demon with the ability to possess its killer.

Horror doesn’t have enough cinematic heroes. We have Ash from the “Evil Dead” series, but that’s about it. For years I’ve wanted to do something that was like the Indiana Jones of horror. A character that we were dropping in on, who we felt has had many previous adventures and could go on to many others. So it was a wonderful surprise when I read the script for “Don’t Kill I” because here was a character that was part Indiana Jones crossed with “The Exorcist”. When Dolph Lundgren was added to the equation, I knew we had something special. Something out of the box, which is always a fun place to start. It was also great to work with a legend like Dolph Lundgren. He was really open and game for playing with his image. He’s used to playing either tough guy or psycho. Here we got to play him as a booze swilling cowboy shaman. We had a great time bringing this character to life and it’s a different side of Dolph than you’ve ever seen before. Dare I say it’s the funniest you’ve ever seen him. Balancing out the cast is horror favorite, Kristina Klebe. I’ve had the pleasure of working with Kristina before and it was great to have her bring balance to the film. We needed someone who could be tough and stand up to a giant like Dolph, yet be vulnerable at times. Kristina did an awesome job of bringing that element to the film. It was also great to work with a variety of practical fx, which I’m a big fan of. We were lucky enough to have FX veteran, Robert Kurtzman (“From Dusk Till Dawn”, “Evil Dead 2”) on our side. His team did an amazing job of helping me spread the red. And boy did we! As they say, the gore the merrier! “Don’t Kill It” is part horror movie, part action movie mixed with a healthy dose of black humor. What I really aim for is to give you something fun. To give you a heaping helping of the things you go to the movies for. To be thrilled, to laugh, be scared and maybe gross you out just a wee bit. It’s a fun combination and a wild ride. I’m really excited for audiences to see it.

MIKE MENDEZ Director A native to Los Angeles, Mike Mendez was in the backyard making movies since the age of 10. At the age of 23, Mike made his first feature film Killers, which was accepted into the Sundance Film Festival. He followed that up with the horror comedy The Convent, which was also accepted into the Sundance Film Festival in 2000. The film was released by Lionsgate in the U.S. In 2002, he produced a documentary for Universal Television and Showtime entitled Masters of Horror, featuring interviews with some of the genre’s most legendary filmmakers. In 2006, Mike’s film The Gravedancers premiered at the Tribeca Film Festival and was released in theaters nationally by Lionsgate & After Dark Films as part of “8 Films To Die For”. After working on short films for X-box and working on television show’s such as “Beavis & Butthead”, Mike’s next film, Big Ass Spider! in 2013 would go on to premiere at the SXSW Film Festival. It also won the Saturn Award that year for best limited release film. The latest batch of work includes the horror anthology, Tales of Halloween, of which he served as a producer and one of the directors. Mike also helmed the 2015 television movie, Lavalantula for the Syfy channel.